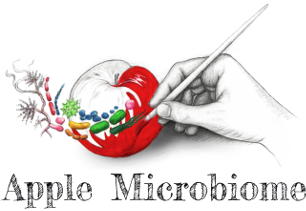 Visit to an orchard in organic farming.
Birgit Birnstingl showed examples of sick apples and talked about organic agriculture.

Today, the students of the Model School Graz have prepared the nutrient media with the help of Tobija Glawogger (TUG Graz, Environmental Biotechnology).
For this they mixed and sterilized nutrients with agar. The resulting solution was still hot in the sterile bench (pure workbench) poured into sterile Petri dishes where it solidifies.
Later, these finished agar plates are used to grow the bacteria from the apple.
Then they cut off the ends of the pipette tips.
These are sterilized and later used to pipet the thick apple pulp onto the agar plates.

Enumeration of bacteria and fungal cultures and separation of colonies for antagonist tests.

The resulting bacterial colonies on the agar plates were counted and applied under sterile conditions individually to new agar plates.